There were an increase of 8.57%, from the previous month, of healthcare data breaches reported during December. 38 breaches of 500 or greater records were made known to the Department of Health and Human Services’ Office for Civil Rights in December 2019. 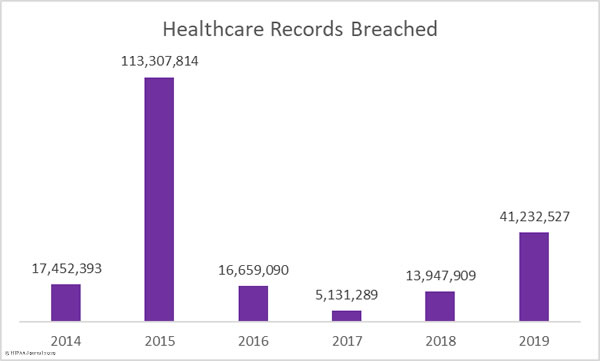 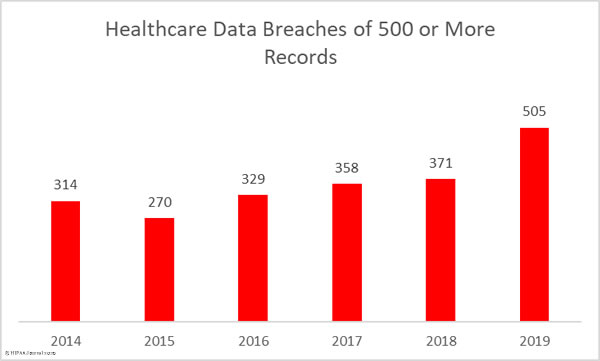 The biggest healthcare data breach reported in December involved Truman Medical Center in Kansas City, MO and impacted the protected health information of 114,466 patients. The records were held on a company-owned laptop computer that was illegally taken from the vehicle of an employee. The laptop was password secured but was not encrypted.

The Colorado Department of Human Services breach was due to a coding mistake on a mailing and Texas Family Psychology Associates discovered an unauthorized person had accessed its electronic medical record system. 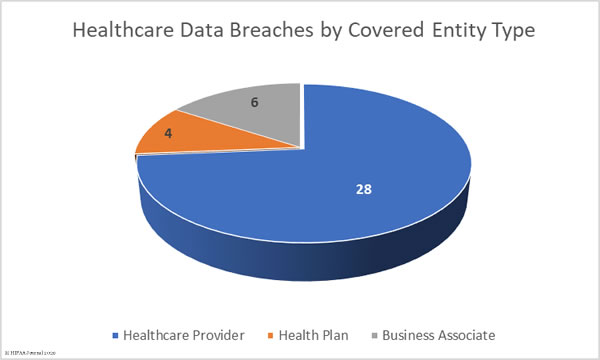 There were 21 hacking/IT incidents reported by HIPAA-covered groups and business associates in December. 226,774 healthcare records were exposed or illegally taken in those incidents. The average breach size was 10,798 records and the median breach size was 5,991 records. The incidents mostly were caused by phishing attacks, ransomware and malware infections, and coding mistakes.

There were 11 instances of unauthorized accessing of healthcare data and impermissible sharing of protected health information due to a mix of insider mistakes and malicious actions by employees. These incidents included 46,364 healthcare records. The mean breach size was 4,214 records and the median breach size was 3,500 records.

There were two stealing incidents reported and three incidents where electronic devices were lost and paperwork including protected health information. 118,877 records were lost or stolen in those incidents. The mean breach size was 23,775 records and the median breach size was 1,100 records. There was also one instance of incorrect disposal of paperwork involving documents including the PHI of 1,174 patients. 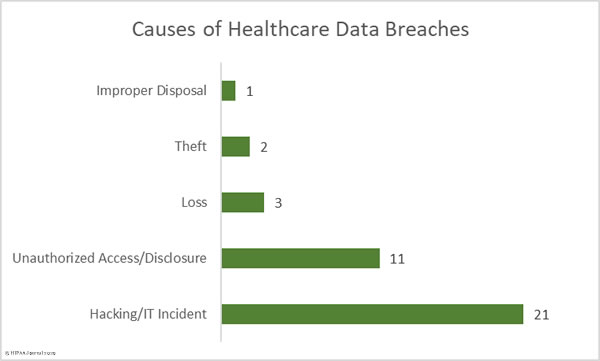 The chart here clearly shows the difficulty healthcare groups have securing their email systems and securing them against unauthorized access. Most of the email incidents in December 2019 were phishing attacks in which unauthorized people obtained the login details of staff members and used them to remotely access their email accounts.

Email security solutions can prevent most phishing and malware-laced emails, but some phishing emails will get through the net. It is therefore important – and a requirement of HIPAA – to supply regular security awareness training to employees to help them spot malicious emails. Multi-factor authentication should also be put in place. In the event to email credentials being stolen by unauthorized individuals, in the vast majority of cases, MFA will stop those details from being used to remotely access email accounts. 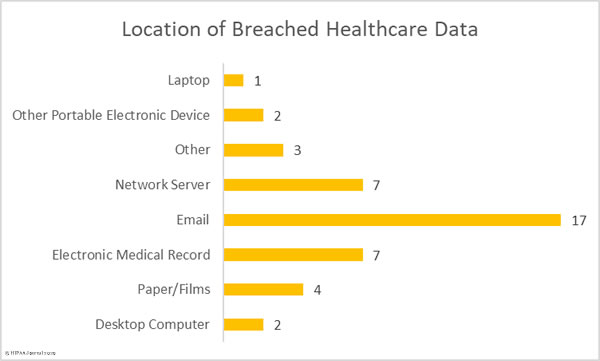 The Department of Health and Human Services’ Office for Civil Right ended December with two more enforcement actions against covered entities that were found to have violated the HIPAA Rules.

Overall, there were 10 financial penalties sanctions on covered entities and business associates in 2019, comprising 2 Civil Monetary Penalties and 8 settlements totaling $12,274,000.

Figures for this report were estimated from the U.S. Department of Health and Human Services’ Office for Civil Rights Research Report on January 21, 2020.